This post includes photos some people may find disturbing.

Kaitlyn Mullin and her boyfriend Austin Ropp were hiking near their home in Elmira, Ontario, Canada, on Sunday, June 7, 2020, when they encountered a tiny tabby and white kitten who was in desperate need of medical attention. “We were walking down a trail when he came walking out to us,” remembers Kaitlyn. “He had a horrible growth on his eye and was clearly in a lot of pain.”

Despite being tired and weak, the kitten managed to let out a little cry for help, and Kaitlyn and Austin didn’t hesitate to assist the beleaguered young cat. “We scooped him up,” says Kaitlyn. “He didn’t protest one bit, and we started to walk back to the car as fast as we could.” 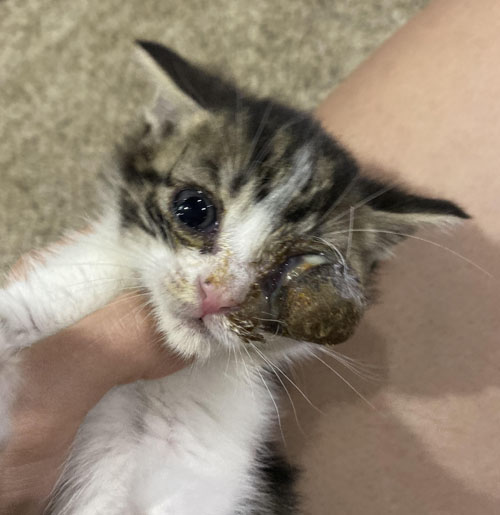 After calling around, the couple eventually found an open veterinary clinic, and they immediately rushed to the office to get the kitten the medical treatment he so obviously needed. A thorough examination revealed the young cat had most likely contracted the feline herpes virus, which had caused his eye to eventually rupture.

“The vet estimated that he was only about three weeks old when we had found him, and due to how bad his infection was, he probably wouldn’t have lasted much longer if we never found him,” remembers Kaitlyn.

Thankfully, Kaitlyn and Austin not only rescued the kitten just in time, they decided to adopt the one-eyed cat, naming him Uno. “We are both big animal lovers, so when we found Uno, we knew that we had to take him in and give him a home,” says Kaitlyn. “He is so sweet and playful, so he fit in perfectly with us.”

Uno not only bonded with his new family right away, he quickly adjusted to his forever home, proving one-eyed cats really aren’t that different from their two-eyed counterparts. “Uno likely never had any vision in his left eye since he was so young,” explains Kaitlyn, “so he has adjusted great to his life as a pirate.”

More than four months after Kaitlyn and Austin found Uno on a hiking trail, this affectionate and fun-loving boy is doing great! He enjoys when his mom and dad take him for walks on his leash, and he adores going to work with his parents. “Everyone there loves him too,” says Kaitlyn. “He is our office mascot.”

Being a young cat, Uno chews on just about anything he can get his teeth on, including toys, string, wood, plants, and even his parents’ hands. Uno is also incredibly playful, which Kaitlyn has found surprises a lot of her friends who often assume one-eyed cats aren’t as active as other felines. “He has to be one of the most playful cats I’ve encountered,” says Kaitlyn. “He has so much energy; he really tires us out by the end of the day.”

However, because Uno is missing his left eye, he is a bit uncoordinated, causing him to fall more often than other cats. “He is also very fast and loves to run, so he sometimes will run at full speed into furniture or the wall,” explains Kaitlyn. Fortunately, Uno’s coordination has improved over time, but he’s still clumsier than the average cat.

Thankfully, Kaitlyn and Austin adore this special boy just the way he is, and they hope other people will consider adopting cats who often get overlooked, including one-eyed kitties like Uno. “They are just as loving as any other cat and just as deserving of a home and love as any other pet,” says Kaitlyn. “All the vet bills and stress is totally worth the love they give you.”

While they didn’t go looking to adopt a one-eyed cat, Kaitlyn and her boyfriend Austin are so grateful they were there to rescue Uno that Sunday in June 2020. After all, if they hadn’t discovered him when they did, there’s a very good chance Uno wouldn’t be alive and Kaitlyn and Austin’s lives today would undoubtedly be very different without this special guy.

“Uno is a part of our family now,” says Kaitlyn. “He is one of the best things to happen to me. He is the sweetest little cat ever.”