When Deborah learned about PJ, a paralyzed and incontinent tabby kitten who was in need of a foster home, she was initially hesitant to help the little special needs cat. While she had a lot of experience fostering neonatal kittens, Deborah had never cared for a cat with incontinence before, and she wasn’t sure if she was up to the challenge. 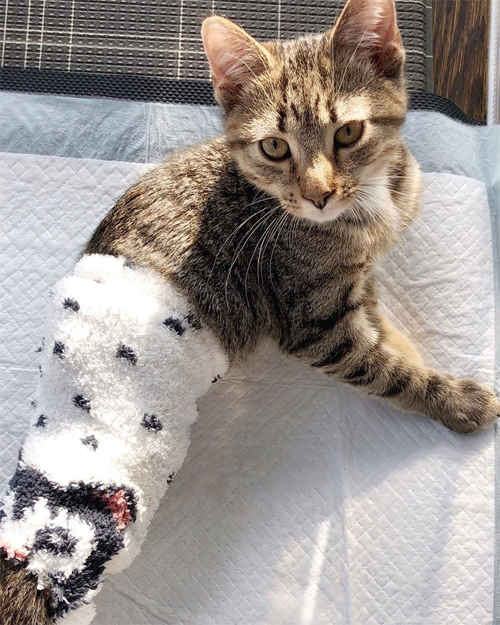 “It felt like a lot to take on at the time, especially since we were at the height of kitten season here in Chicago,” explains Deborah. Plus, PJ, who was already paralyzed and incontinent when she was rescued from the streets of Chicago by CARF: The Critical Animal Relief Foundation in early 2019, wasn’t at risk of being euthanized.

However, the organization had been unable to find a fosterer who was willing to take on the special needs tabby, so PJ was being boarded at Village West Veterinary, the vet’s office run by CARF’s founder, Dr. Bruce Silverman. “She was cared for and adored by the staff,” says Deborah, “but the reality was that she was spending the bulk of her day in a cage.”

Deborah realized it would be difficult for PJ to find a home because of her special needs, and she also knew it would be even harder for her to get adopted if she spent most of her time confined to a cage. “She needed people to see her in a family setting, interacting with people and other pets, and behaving like a typical kitten,” says Deborah.

After weeks of careful consideration, Deborah began fostering PJ in June 2019 when she was approximately four months old. Thankfully, it didn’t take long for the adorable tabby to settle into her new surroundings, but did it take Deborah a little while to get the hang of expressing her bladder and bowels multiple times a day. “There was definitely a learning curve to understanding how to care for PJ,” says Deborah. “Those first couple of weeks were a little rough, and more than once I found myself questioning my decision to foster her.”

Fortunately, Deborah refused to give up, and with the help of lots of research and advice from Facebook groups and Instagram accounts about paralyzed cats, she eventually became comfortable caring for PJ. They now have a great routine, and it takes Deborah just a couple of minutes to express PJ’s bladder and bowels and change her diapers.

“It’s really not that big of a deal, and it’s way less messy than changing a human baby diaper,” explains Deborah. “People who own dogs generally need to walk them several times a day and pick up their poop – caring for PJ isn’t really much different.”

Plus, putting PJ on a raw diet has made her stool smaller and firmer, which makes expressing her bowels a lot easier, although she still has the occasional accident. “She doesn’t know when she has to go, so she wears diapers around-the-clock, with ‘nakey time’ as needed to air out her bits,” says Deborah.

Deborah, who has cared for countless kittens, believes PJ is one of the sweetest and friendliest cats she’s ever met. Not only does this affectionate tabby adore her foster family, she absolutely loves the other cats who share her home. “I like to think the universe recognizes the difficulty that special needs kitties have in finding forever homes,” says Deborah, “so it blesses them with larger-than-life personalities.”

When she’s not snuggling on the couch with her foster family, PJ — who was most likely born with paralysis and incontinence — enjoys playing with toys and other cats. “PJ likes to play ‘chase’ with our resident cat, Millie,” explains Deborah. “She’ll stalk Millie and pounce on her, then turn and scoot away as fast as she can. It’s cute because you can tell that Millie is running a little slow on purpose as she chases PJ.”

This special girl is also extremely intelligent, and not only does she know how to play fetch, Deborah has also taught PJ to come when she rings a bell. “We have our cats trained to come for treats when we ring a bell, and PJ picked up on that immediately,” says Deborah. “She’s usually the first one to come ‘running.’ “

While Deborah is keeping an open mind about getting PJ a cart, she believes this happy-go-lucky kitty is perfectly happy just the way she is. “PJ is an incredibly strong scooter — she uses her front legs to drag herself around the house and can even climb up onto the couch with us,” explains Deborah. “At just eight months old, she’s already got the shoulders of a linebacker and baseball mitts for front paws.”

However, Deborah realizes PJ’s unique way of moving can put a lot of strain on her neck and shoulders, so after consulting a therapist, she began using a variety of massage techniques to keep her muscles as healthy as possible. While Deborah has also met a lot of people who feel sorry for PJ simply because she’s unable to move like a typical cat, she’s confident there’s no reason to pity this obviously happy girl.

“That’s a natural human reaction, but PJ has no idea she’s different, so it’s just wasted emotion,” says Deborah. “She’s not sitting around dwelling on what she can’t do, she’s too busy doing everything she can.”

Still, there are a few things PJ can’t do, like use a litter box, scratch her own back, or jump on counters. Otherwise, she’s a fairly typical cat, at least when it comes to practical matters, but PJ’s foster mom believes this wonderful girl is anything but ordinary.

“She is truly unique – not because she’s paralyzed, but because she’s the total package,” says Deborah. “PJ is a daily reminder to live in the moment and enjoy what’s right in front of you. I absolutely adore her energy, quirkiness, and beautiful spirit, and I’m determined to find her a forever family that feels the same way.”