When Loren Irigoyen saw a post on social media about an adorable cat her friend Susy had rescued from the grounds of a sports club in Chihuahua, Mexico, she offered to foster the blue-eyed feline. 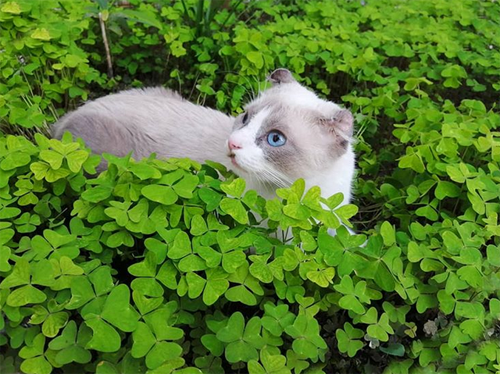 “He was so sweet and let her take him with no trouble,” says Loren, so she thought he would get along well with her resident cats, Chica and Grande. While Susy had assumed the cat, who had unusually small ears, was a Foldex or an American Curl, when Loren met him for the first time in January 2018, she initially thought his ears had been burned.

The following day, Loren took her new foster cat to the vet where she discovered he was approximately a year old and showed no evidence of trauma, suggesting the friendly feline was actually born with his unique ears. “Then we noticed the cleft lip, the different sizes of his pupils — even different-colored eyes and a cataract,” remembers Loren.

After learning the young cat’s tiny ears were the result of a congenital abnormality, not abuse or an accident, Loren decided to name him Dumbo, an ironic ode to the beloved elephant with oversized ears. “Also, I love the movie and the love of the mom elephant for her son who is physically different,” explains Loren. Despite looking different from a typical feline, Dumbo was given a clean bill of health, so Loren began looking on social media to see if he was actually a lost pet who needed to be reunited with his family.

Loren began sharing Dumbo’s photo in local groups on social media, and she was immediately surprised by the amount of attention his images attracted. “I noticed lots of people asking to adopt him and tagging their friends on Dumbo’s pictures,” says Loren, “but people were always laughing, saying he looked like a cartoon.”

Initially, she had intended to reunite him with his family, if in fact he belonged to someone, or find him a forever home, but Loren began to realize it would be very difficult for her to make sure Dumbo was adopted for the right reason.

Plus, after fostering Dumbo for two weeks, Loren found she had grown to love him, and she knew she would be able to give him the home and family he deserved. “I felt no one was going to take care of him and love him like me, so I kept him,” says Loren.

More than a year later, Dumbo is doing great, although he still hasn’t been able to win over Chica and Grande, the other cats who share his home. “Dumbo always wants to be part of what other cats are doing, and his enthusiasm is not well received,” explains Loren. “He gets too close to other cats when they are sleeping, eating, and even using the litter box.”

In addition to his excessive eagerness, Loren believes Dumbo’s unique ears cause him to constantly mimic the appearance of a cat who is angry or defensive, so Chica and Grande are unsure how to interact with him. Consequently, his sisters won’t play with him, so Dumbo spends most of his time with his mom, whether they’re watching TV together or going for a ride in the car to visit her mother and her three cats.

Thankfully, Dumbo is still a sweet and happy boy despite being misunderstood by Chica and Grande, and Loren insists there’s no reason to feel sorry for him because he looks different from the average kitty. “There are no challenges as a result of Dumbo having a cleft lip,” says Loren. “He can eat, meow, and clean himself like any other cat.”

In addition to meeting people who pity Dumbo because of his appearance, Loren has encountered a lot of individuals who have difficulty believing cats, like people, can be born with cleft lips. “They exist,” says Loren, “and they are waiting for a family to love them, to take special care of them if needed, or to give them normal care like any other cat. Their face may be different, but as it doesn’t matter for them, it shouldn’t matter for us.”

While Dumbo might not look like every other cat, Loren thinks he is beautiful and sweet, and she feels comfortable and happy every time she looks at his face. Dumbo also motivates her to work hard so that she can give him, as well as Chica and Grande, a better life, although it’s difficult to imagine a better home for this special boy. “I’m saving money to buy a house where I can built a catio,” says Loren.