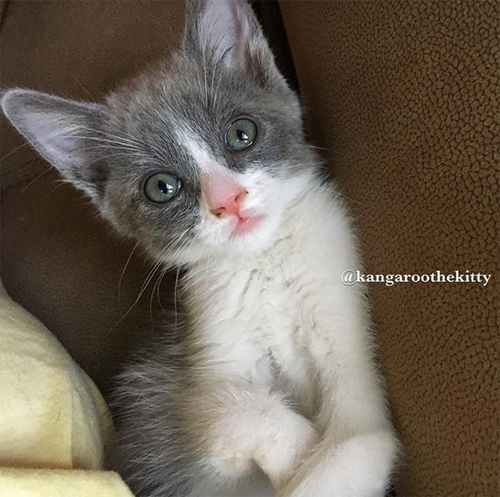 Heather already had experience with special needs cats, having adopted Ms. Minnesota, a gorgeous cat with a heart condition, just a few years earlier. “She sought to adopt this beauty even after it was revealed that she wasn’t actually adoptable due to her big heart,” explains Orlando. “She persisted and was able to provide Ms. Minnesota with a loving home and wonderful care until the time came for the crossing of the Rainbow Bridge.”

Like with Ms. Minnesota, the couple felt many people might be hesitant to adopt Ale’alani — who was born on July 4, 2017, with radial hypoplasia (RH) — but Orlando and Heather thought the special needs kitten would make the perfect addition to their home.

“We just knew she had to join our little family,” says Orlando, so he and Heather contacted the rescue and arranged to meet Ale’alani in her foster home. Incredibly, Ale’alani’s foster parents, Joyce and Christian, already had experience with radial hypoplasia — a congenital condition that causes cats to have short and twisted front legs — because they’d adopted Kanga Roo, an RH kitty, from Saving Grace Rescue in 2014.

When Ale’alani was just a couple of months old, Orlando and Heather visited her in her foster home where she was being cared for by people who had plenty of experience with RH, and the couple instantly fell in love with the diminutive special needs kitten. “She was incredibly tiny,” remembers Orlando, “too tiny. We had to wait patiently until she was four whole pounds before she was able to come home with us.”

Several weeks passed, and on October 8, 2017, Ale’alani was finally big enough to join her new family, and Orlando and Heather were incredibly eager to welcome her into their home.

However, while Heather had some experience with special needs cats, neither she nor Orlando had ever taken care of an RH kitty before. “We thought her RH might limit her daily activities or perhaps she’d have some associated health issues,” explains Orlando, “but she’s really just like any other kitten.”

Orlando and Heather quickly discovered that due to Ale’alani’s unique front legs, she has some limitations, but they also learned that this cute grey and white kitten doesn’t let anything stand her in way when she wants to do something. “Lani can’t jump up and down from places quite as high as other cats can,” says Orlando. “She is a good and persistent climber, though, and we’ve given her pet stairs to help in some places around the house.”

Aside from a few sets of stairs, Ale’alani’s parents haven’t had to make any other special accommodations for her, but Orlando and Heather — along with their vet — monitor her closely to make sure she continues to grow and develop into a healthy adult cat.

Currently, Ale’alani — whose name is Hawaiian for “the sweetest voice of the heavens” — is doing great, and she’s a typical 8-month-old cat who loves to play and cuddle. “You should see her when the laser pointer comes out!” says Orlando. “Woosh she goes around the house!”

This adorable RH kitten has also formed a strong bond with her older brother Bailey, a cat Orlando and Heather adopted from the shelter where they regularly volunteer. “They play together, sleep cuddled up, and groom each other,” says Orlando.

When Ale’alani isn’t by Bailey’s side, she loves making muffins in her parents’ laps and attacking their feet in the middle of the night, and Orlando and Heather are certain this young special needs cat isn’t all that different from her brother or Ms. Bubbles, their senior kitty. “Lani plays with and keeps up with our other cats and gets around the house just fine,” says Orlando.

While a lot of people are reluctant to adopt special needs cats because they’re worried about the extra time and money they might require, Orlando says they shouldn’t automatically rule out kitties like Ale’alani. “The most important thing is to understand what — if any — special care the cat might need,” says Orlando, “and how that fits into your lifestyle.”

Orlando and Heather also recommend seeking out an organization that is knowledgeable about special needs cats and can provide useful information and resources just as Saving Grace Rescue did for them with Ale’alani. “It’s amazing to think such a loving kitty who has become such an integral part of our family might have not have had a chance had she not been lucky enough to come across people who understood RH,” says Orlando.

While Orlando and Heather have only had Ale’alani for a little over five months, this adorable grey and white kitten has become a huge part of their lives and they’re so grateful they were given the opportunity to adopt her. “We feel a great sense of gratitude toward the many who give their time, resources, and heart to shelters or rescues like Saving Grace that give many animals a chance to be loved in a furever home,” says Orlando.

While Ale’alani got her unique Hawaiian name from Joyce, the woman who took care of her until Orlando and Heather came along, the San Francisco couple has come up with their own nickname for this sweet special needs cat. “We often refer to her as our little surfer girl,” says Orlando. “We just love her.”