When Kerry Denman learned her parents’ neighbors had a litter of kittens who were available for adoption, she couldn’t resist the opportunity to meet the young cats, not intending to take one of them home with her. After all, Kerry had recently purchased a shiny, new apartment, and while she wanted a pet of her own, she was putting it off until her home was a little less pristine. “During this time I was the woman gate crashing peoples houses to see their cats,” explains Kerry. “If a friend of a friend of a friend knew of a litter of kittens local, I’d be the one inviting myself round for cuddles.”

In July 2012, Kerry’s mother took her to visit the kittens, who were approximately five weeks old, and one of them immediately caught her attention. “The owner waved her hand in the direction of a laundry bin and said ‘Don’t bother with that one, he’s got something wrong with his eyes,’ ” remembers Kerry. “I took a look and on top of this pretty tall laundry basket full of old clothes was a tiny, scruffy ball of fluff.” 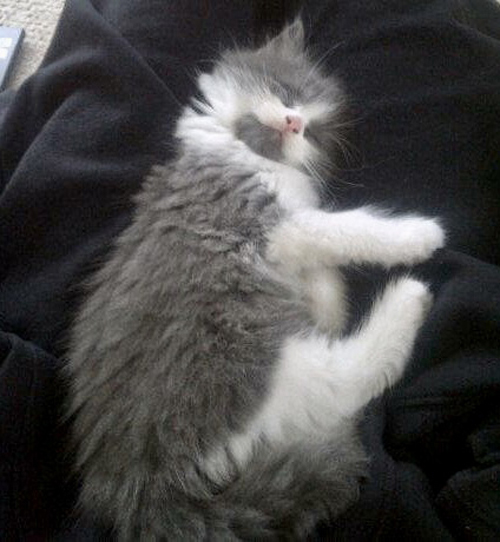 As soon as she picked up the little kitten, Kerry realized he wasn’t just small, he was blind, malnourished, and covered in fleas, and she learned he had been rejected by his birth mother when he was just a couple of weeks old. When Kerry met him, the kitten had been eating wet food for approximately one week, but he was far from healthy.

“The family had kind of left him to make a nest on top of the laundry basket, taking him down to play and eat,” says Kerry. “I basically got the impression that they were waiting for him to die.” After leaving the family’s house, Kerry kept thinking about the little special needs kitty, but she was unsure if she was up for the challenge of caring for a blind cat.

Fortunately, she found a lot of really useful information online, and nothing Kerry read made her reluctant to adopt the blind kitten. “Even if I had found something, I doubt that it would have changed my mind,” says Kerry. “I didn’t like the idea of leaving him just because he might require more effort — what would that say about me?”

Just two days after meeting the kitten for the first time, Kerry returned to his owner’s home with a box to bring him home in and a £10 donation to get his mother spayed. The kitten, who Kerry named Louie after one of her friends, quickly settled into his new home, thanks in no small part to his mom.

“I did everything I’d read — didn’t leave things in the middle of the floor, confined him to certain rooms to begin with, played him music and sounds of birds and other animals, bought toys that made noises,” remembers Kerry. “He adapted so well. He was just Louie.” 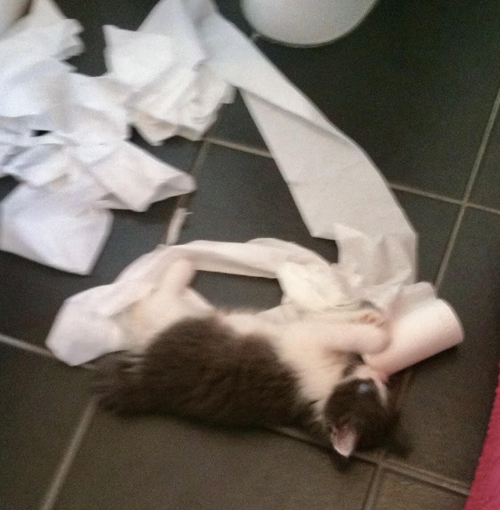 While people often worry cats with vision issues will have difficulty finding or using the litter box, this definitely wasn’t a problem for Louie, and nearly seven years later, this blind boy has never had a single accident.

Today, Louie is doing well, and while no one knows the exact cause of his vision issues — although cataracts have definitely been ruled out — being blind doesn’t prevent him from having a full and active life. “I’m still not 100% sure if he sees shadows and light,” says Kerry. “Sometimes I think maybe he does, but honestly I think it’s more likely his senses and whiskers compensate so much that it seems like he’s not blind.”

While it’s possible further testing might shed some light on the cause of Louie’s vision issues, it’s extremely unlikely anything can be done to improve his sight, so Kerry has decided against subjecting him to unnecessary procedures and examinations. “I wasn’t about to put him through tests, prodded and poked, just to provide myself with an answer,” explains Kerry. “His blindness, in my opinion, seems to cause him the least amount of problems of the things he has wrong.”

After all, when Louie was just six weeks old, he was diagnosed with patellar luxation, a condition that causes his kneecaps to become dislocated. The vet explained that while it might cause some discomfort, Louie wasn’t in any pain, so it wasn’t necessary for anything to be done at that time.

However, when Louie started limping a few years later, the doctor recommended a month of cage rest, which Kerry hated as much as — if not more than — her beloved cat. “I bought a giant dog crate and his litter tray, bed, and toys went in it,” remembers Kerry. “I would leave him during the day to go to work and then come back and lie next to the cage and he’d cry constantly to come out. I’d open it for cuddles and then getting him back in would be a nightmare.”

Fortunately, it worked, and since then, Louie hasn’t had any issues with his knees, although in September 2018, he developed yet another health problem. “I noticed some bleeding from Louie’s mouth and rushed him to the vet only to find what looked like a massive tumor under his tongue,” says Kerry. “The vet told us it was most likely squamous cell carcinoma and that we should prepare ourselves to have him put to sleep in a matter of weeks.”

Kerry and her partner were devastated, unable to imagine their home or their family without Louie in it. However, just a week later, they received the biopsy results, which revealed the mass was non-cancerous. Eventually, the mass was surgically removed, and while Louie has since been diagnosed with kidney disease, Kerry and her partner are managing his symptoms with special food.

Without a doubt, Louie has had a lot of challenges, from blindness to patellar luxation to kidney disease, but Kerry has never once regretted her decision to adopt him. “Cats are amazing creatures,” says Kerry. “Their tenacity and sheer resolve to continue to be their best selves despite what we perceive to be a limitation is astounding. And you simply don’t realize this unless you see it first hand.”

After all, despite having a number of health issues, Louie loves to play, especially with paper balls, and he enjoys snuggling with his parents, eating treats, taking naps, and waking his mom and dad up in the morning for attention. In fact, this blind kitty is so special, he turned Kerry’s partner into a cat lover. “We moved in with my partner a year and a half ago,” says Kerry. “Cat dad didn’t know he was a cat person at the time. He was kind of scared of Louie if I’m honest.”

While Kerry wanted her cat and her partner to get along, she was determined to do what was best for Louie, deciding they would return to her London apartment if their new living arrangement didn’t work out. Still, the couple wanted to give cohabitation a good try, so Kerry’s partner took over feeding Louie all of his meals and treats, eventually allowing them to forge a special relationship.

A year and a half later, this little family is incredibly close, and Louie now has two parents who are completely devoted to him. “Cat dad fell head over heels,” says Kerry. “We both say we love Louie more than each other now. And he’s no longer my cat, he’s ours.”