Update: Sadly, Sybil in February 2019 after enjoying a wonderful life with her dad and his family.

When Drew Krull’s brother showed him a Facebook post from someone who was looking for a home for a five-week-old kitten, he was immediately interested in adopting the fluffy grey and white cat. “The post was accompanied by a badly lit, blurry photo, but I knew immediately that I want to meet her,” remembers Drew.

In June 2018, Drew traveled to the kitten’s home to meet her in person, and his first impression of the young feline was that she was young and fearless. “When we arrived, her owner put her down on a small, glass picnic table, and she kept wandering toward the edge as if she was about to step off,” says Drew. “I picked her up, because I didn’t want her to fall, and I was hooked.”

The kitten immediately began cuddling with Drew — licking his chest and arms and staring at him with her big, beautiful eyes. Smitten with young kitten, Drew adopted her, naming her Sybil in honor of Sybil Crawley, one of his favorite characters from Downton Abbey. “I chose the name because she was such a sweet, gentle cat, with a touch of refinement,” explains Drew.

Shortly after bringing Sybil back to the home he shares with his brother in Rochester, New York, Drew gave the kitten what he would later realize was her first of many baths. Shortly after adopting Sybil, Drew took her to the vet where he learned she was actually approximately four months old, not five weeks old, and her wobbliness — which he had attributed to the kitten’s young age — might actually be a sign of a medical issue.

“When we first brought Sybil home, her back legs were unstable, but she could walk, run, and even jump and climb into my bed,” explains Drew. However, not long after finding her forever home, Sybil’s mobility began to rapidly decline, and the veterinarian — after using blood work to rule out more straightforward health issues — warned Drew that her symptoms might be related to a neurological condition.

During this time, Sybil began running into walls and furniture and stepping in her food and water bowls, indicating possible visual impairment. “The vet suggested we check whether she responded to a laser pointer, and she didn’t show any interest at all during that test,” remembers Drew. Sybil also failed to exhibit a menace response, a behavioral reaction to a visual threat, indicating she was probably unable to see, so she was referred to Companion Animal Hospital at Cornell University for a neurological examination.

“Her legs continued to worsen while we waited for her appointment date — this is when her front legs really started to act up,” explains Drew. “While her back legs hadn’t cooperated for some time, she was beginning to stand with her front legs folded over.”

While the initial neurological examination didn’t reveal the cause of Sybil’s health issues, Drew learned she is blind and doesn’t always have full mentation, causing her to “zone out” periodically. Despite being unable to find the root cause of Sybil’s medical problems, the neurologist prescribed her an antibiotic and a steroid in hopes of slowing the progression of her unknown condition.

However, a week after seeing the neurologist, Sybil had her first known seizure and was immediately placed on anti-seizure medication. In order to determine the cause of Sybil’s seizures, the neurologist recommended a spinal tap and an MRI, and Drew set up a GoFundMe, enabling him to raise the money needed to cover the cost of the expensive procedures.

When Sybil went for her MRI and spinal tap at the end of the November 2018, her mobility had declined to the point where she was unable to walk without assistance. “Since she’d progressed so far, the vet suspected Sybil was suffering from a storage disease, and decided that it was prudent to do the spinal tap first and see whether the MRI still made sense once we got the results of the spinal tap,” explains Drew. “The spinal tap’s results left the vet convinced that a storage disease is the most likely culprit, which meant the MRI wasn’t going to tell us anything.”

Also, because Sybil’s blood pressure dropped dangerously low while she was under anesthesia for the spinal tap, the vet determined it would be too risky to anesthetize her again in the future, even for a fairly simple procedure like sterilization. While Sybil doesn’t have an official diagnosis, the vet is confident she probably has a storage disease, which is a group of genetic disorders characterized by deficiencies in enzymes.

Sadly, there aren’t a lot of good treatment options available for cats with storage diseases, and given the risk associated with putting Sybil under anesthesia, further diagnostic tests could end up being fatal for this adorable kitten. “Prognoses for storage diseases are never good,” says Drew, “which means we’re focused on keeping her seizures under control and maintaining her quality of life for as long as we can.”

While Sybil relies on Drew and his brother’s help for her daily activities — including eating, drinking, using the litter box, and grooming — she’s still a happy girl who doesn’t mind being bathed or getting dried off afterwards. “Often, we get out the hair dryer to speed the process along, as well as to give her that fresh-from-the-salon look,” says Drew.

Because Sybil is so dependent on her dad and uncle, she has a very special bond with Drew and his brother and she wants to be with at least one of them at all times. “She loves to cuddle and one of the few times she makes any noise is when she meows to let us know that she’s awake and wants attention,” says Drew. “She sleeps with my brother or me every night — I think she’s slept alone once or twice since we brought her home in June.”

In addition to her dad and uncle, this cute special needs cat adores baked goods, and if Drew or his brother are eating a toasted bagel or graham crackers while holding a sleeping Sybil, she will wake up and lick their faces for several minutes. While Drew and his brother absolutely adore Sybil, due to the serious and progressive nature of her condition, they know not everyone is in a position to adopt a cat with so many special needs.

“I can’t say that taking in a disabled cat is a wise choice for everyone, even if they have the resources and wherewithal to care for a typical cat,” says Drew. “Adopting an animal is always a commitment, but there are extra expenses and responsibilities associated with special needs cats.”

However, Drew is certain there are a lot of special needs cats with less severe and debilitating conditions who are perfectly capable of living relatively normal lives, so he hopes other people will still consider adopting kitties who are blind or have mobility issues that aren’t as serious as Sybil’s. “Lots of these cats still play, hunt, and climb, vision notwithstanding,” explains Drew. “There are lots of cats out there facing some of these struggles, and, fortunately, many of them have much better prospects than Sybil does.” 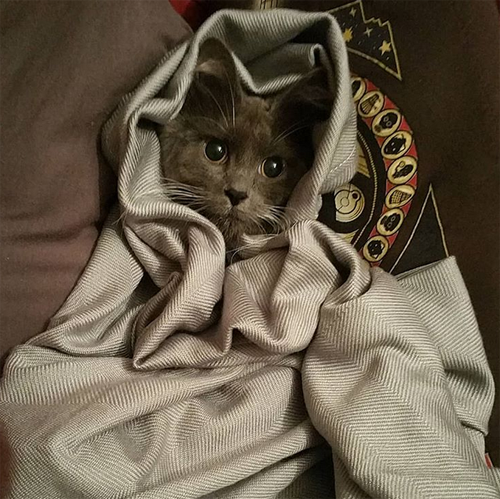 When Drew — a lifelong cat lover — decided to adopt Sybil, he didn’t even realize she had special needs, and yet from the moment he met her, he and his brother have selflessly committed themselves to giving her the best care possible. While it’s impossible for anyone to say what the future has in store for this beautiful little cat, the bond Sybil has formed with her dad and uncle will endure no matter what happens over the coming months and years.

“I’ve always loved cats, but there’s a different quality to my relationship with Sybil,” says Drew. “She’s so dependent on me that she’s become a kind of focal point in my life. She’s only been living with me for around half a year, but it’s hard to imagine my life without her, although the fact that her condition is so degenerative means I find myself doing just that on a daily basis.”