Kali Waddilove was working at a shelter near her home in Las Vegas when a member of the public came in with a kitten he had discovered in his shed. “He was about five weeks old, dirty, and underweight,” says Kali, and the man didn’t know how the young feline had ended up on his property.

After Kali cleaned up the fluffy grey and white kitten, she discovered he had unusually short and twisted front legs, which she later learned was due to radial hypoplasia (RH), a congenital condition that is related to the same genetic mutation that causes feline polydactylism.

While cats with radial hypoplasia can have very happy and active lives, the condition can impact their mobility, giving Kali some insight into how the kitten may have ended up in the shed. ‘”He was mostly likely born to a community cat and couldn’t keep up with her when she moved her litter,” explains Kali.

While Kali didn’t know anything about radial hypoplasia when she met the five-week-old feline in October 2019, she immediately knew he would need some special care, so she offered to foster him until he was adopted. “I’ve fostered dozens of kittens over many years, so I took on the new challenge of an RH kitten never having even heard of RH!” remembers Kali. 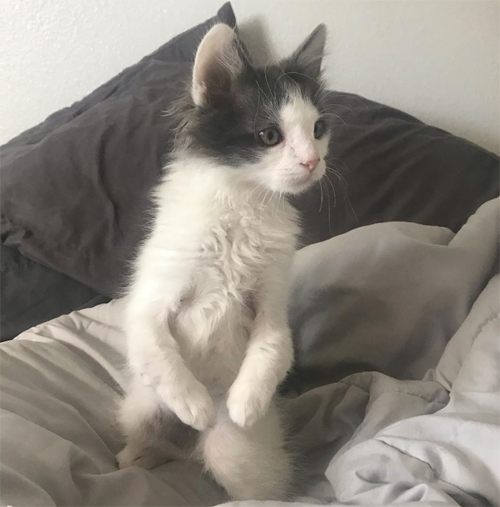 However, before Kali could bring the fluffy special needs kitten home with her, she had to give him a name, so she dubbed him Turtle. “The first thing that popped in my head when I was looking at him was his arms reminded me of a sea turtle’s flippers,” explains Kali.

It didn’t take long for Turtle to adjust to his foster home, nor did it take long for Kali to become smitten with this quirky and one-of-a-kind boy. Just three months after meeting Turtle for the first time, Kali officially adopted him on January 9, 2020. “After falling in love with his personality, I knew there was nothing I wouldn’t be willing to do to provide him with the best care possible and anything he needed for the rest of his life!” says Kali.

Five months later, this handsome special needs cat is doing great, and while he moves a bit differently from a typical feline, Turtle is surprisingly agile. “When people see him they assume that he isn’t able to function like your average cat,” explains Kali. “Even my mother was shocked that he could jump onto the kitchen counters.”

In addition to jumping, Turtle has no trouble going up and down stairs, and Kali has placed steps around her home to make it easier for him to get on and off the furniture. She’s also scattered lots of rugs around her house to give this beautiful boy plenty of comfortable places to rest, proving that while cats with radial hypoplasia might need some special accommodations, they’re usually easier to care for than people often assume.

“I wish more people understood that ‘special needs’ simply means that they require a different set of needs than your average cat,” says Kali. “It’s not necessarily a ton of extra care or special training.” However, because Turtle’s belly tends to graze the floor when he walks, he needs regular baths, and he prefers to play with stationary toys because running around a lot can be very tiring.

Also, due to his unusually short and twisted front limbs, using the litter box can be a bit of a challenge for Turtle. “Like most special needs kitties, sometimes he has trouble in the litter box, either not being able to cover his waste, or stepping in it afterwards,” explains Kali, but she and her other cats are more than happy to provide Turtle with help in this department.

While he sometimes needs assistance from his fellow felines, Turtle is also a wonderful caretaker, and there’s nothing he likes more than being a surrogate big brother to the foster kittens Kali brings home from work. “Turtle has lots of favorite activities, but none top his love of playing with foster kittens,” says Kali. “He grew up with lots of fosters around so he really enjoys getting to be a big kitten.”

Turtle also adores spending supervised time outside, especially when his mom takes him for walks in his stroller, and he loves sunbathing. While it’s apparent Turtle is a very happy and active cat, people frequently assume he must be in pain due to his radial hypoplasia. Fortunately, Kali has never noticed any signs of discomfort, and even though it’s possible Turtle may develop arthritis or joint issues later on in his life, she’s still confident kitties with radial hypoplasia make wonderful companions.

“It’s definitely harder to get special needs cats and kittens adopted,” says Kali, who works at a shelter, “but if more people knew that they aren’t harder to take care of — just different — maybe more would be willing to adopt them.”

When Kali met Turtle in October 2019, she didn’t know anything about radial hypoplasia, nor was she looking to add another feline family member to her home. However, less than a year later, it’s impossible for Kali to imagine her life without this remarkable kitty, especially because Turtle has helped transform her into an advocate for animals with special needs.

“I seek out other special needs cats and kittens to rescue and foster now because he’s shown all of us that being different doesn’t mean he can’t live a full, happy life,” says Kali. “He’s hilarious and weird and adorable and sweet and a million other things.”