When Shannon Basner, one of the founders of Mojo’s Hope, learned another Alaskan animal rescue, Tundra Cat Rehabilitation and Adoption Center (TCRAC), was looking for someone to care for a paralyzed kitten, she knew she had to help the young special needs cat.

“Mojo’s Hope’s mission is to rescue and rehabilitate animals with special needs,” explains Shannon. “My board and I discussed it, and since I am the primary foster, they were in complete support of me taking him in.”

On August 27, 2018, Shannon traveled from her home in Anchorage to Eagle River to meet the kitten in person, and she discovered he was much smaller than she had anticipated. “I took him and held him close to my chest and he was purring away,” remembers Shannon. “He melted into me, and I knew then he was a kitty warrior.”

As Shannon cuddled the three-week-old kitten, Stefanie from TCRAC explained that he’d been living on the streets since birth with his mother — a homeless cat — and his litter mates. A medical examination later revealed the kitten had most likely been paralyzed since birth, probably due to an injury during a difficult delivery, making it even more amazing that he had been able to survive on the streets. “What a remarkable momma cat she was to provide him with the care he needed and keeping him alive,” says Shannon. “That in itself spoke volumes to me about his character and hers.”

Sadly, one day the mother cat was moving her brood when she became startled, causing her to drop the paralyzed kitten in someone’s yard before running off. Fortunately, a passerby witnessed the incident and contacted TCRAC who in turned reached out to Shannon and Mojo’s Hope.

“My main mission from when I was a child was to work with and help children and animals with special needs,” explains Shannon, which is why she founded Mojo’s Hope and Alaska’s KAAATs, a feline advocacy organization dedicated to helping cats with a wide range of challenges, including behavioral, emotional, physical, and medical issues.

Consequently, when Shannon met the 3-week-old paralyzed kitten, she eagerly agreed to foster him, eventually naming the striking feline HarPURR. “My friend and the president of Mojo’s Hope, Wendi, sent me a photo of a Harper seal and said that reminded her of him,” explains Shannon. “Since I am a lover of all puns, and the name was adorable, I immediately told her that I felt that was ameowzing — and matched him beautifully — and changed it to HarPURR.”

Shortly after Shannon started fostering HarPURR, she realized he had some digestive issues and was prone to urinary tract infections, both fairly common issues for cats with paralysis and incontinence. Shannon worked closely with her vet to manage and treat HarPURR’s health challenges, but in December 2018, he developed a urinary blockage and had to be rushed to the emergency vet.

“The vet looked at me and told me it wasn’t good news and that if he survives, he will be there for several days and that cats like him don’t have a good quality of life,” says Shannon.

In addition to a urinary blockage, HarPURR was diagnosed with megacolon, a term used to describe a very dilated, flaccid, incompetent colon, and the veterinary staff had to manually remove impacted feces from his colon. Following this procedure, HarPURR made a remarkable recovery, surprising everyone at the vet’s office with his tenacity and resilience.

“Thankfully, they underestimated his tough little warrior spirit and he came through very quickly with flying colors,” says Shannon. “This made me believe even more that he was a survivor and should not be judged by his disability.”

Just two days after he was admitted to the animal hospital, HarPURR was discharged, and Shannon immediately began giving him special food to prevent him from developing crystals in his urine, as well as cisapride, a medication for chronic constipation. Shannon also introduced a high fiber food into HarPURR’s diet and began giving him regular doses of probiotics and lactulose, a laxative medication.

Several months later, this handsome cat’s bowel movements still present a challenge for Shannon, but she remains determined to give HarPURR the best possible care. “I lovingly call his daily poop adventures, ‘Poopscapades,’ ” says Shannon. “But silliness aside, it is extremely serious and this requires a lot of time and observation to ensure he goes properly and completely.”

Fortunately, HarPURR — who will celebrate his first birthday next month — is doing well, especially because he found his forever home when Shannon officially adopted him on June 1, 2019, allowing this special kitten to remain with his canine best friend, Cinder.

“When I took HarPURR in as a foster, I did not intend to adopt him; however, he adopted all of us, especially Cinder and myself,” says Shannon. Thanks to his mom, HarPURR’s days are filled with two of his favorite pastimes: cuddling with Shannon and snuggling with Cinder.

This adorable special needs cat also enjoys wrestling with Charity the chihuahua, playing with Petie-love, the 15-year-old feline, and racing around the house and yard with or without the cart he’s been using since he was three months old. “I felt it was imperative to expose him to the use of a cart as another means of mobility for him,” explains Shannon. “If he didn’t enjoy it or if he had shown any signs of stress, we wouldn’t pursue using it.”

Thankfully, with the help of lots of positive reinforcement, HarPURR took to using his cart, and several months later, this handsome paralyzed cat seems to enjoy having multiple methods of navigating his environment. “He has the best of both worlds,” says Shannon. “He loves being able to zip around the house, playing with the other cats and also exploring outdoors, frolicking in the grass, romping with the dogs with supervision in my yard. There is so much joy in his eyes and the way he hops as he pounces and zips is just beyond beautiful to see.”

While people often assume paralyzed cats aren’t capable of having happy and active lives, HarPURR definitely proves them wrong, which is why Shannon believes it’s so important for her to share his story with world. “What I wish is that people could step outside of themselves, stop anthropomorphizing, and see each beautiful and purrecious special needs cat for who they are as individuals, not as their disability,” explains Shannon.

Having formed an incredibly close bond with HarPURR over the past 10 months, Shannon doesn’t pity or feel sorry for this very special cat. Instead, she views this brave boy as an inspiration who has had a tremendous impact on her life and her family.

“His kitty warrior spirit and the unconditional love he shares and receives in my home with Cinder, myself, and the rest of the crew has been an immeasurable gift,” says Shannon. “He has this unique, beautiful ability to bring out the best in everyone around him with his tender and tough spirit.” 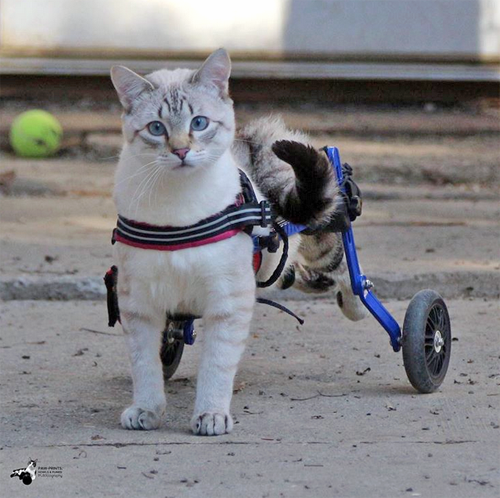