After awaking from a dream about adopting a cat named after a character from The Goonies, one of her favorite movies as a child, Sam checked Facebook, only to discover a shelter a few cities away from her home in St. Catharine’s, Ontario, had chosen Goonie, an adorable grey kitty, to be their pet of the day. “I immediately was like, ‘Oh my god. We need this cat,’ ” remembers Sam, “and I called them as soon as they opened and asked them to put our name down.”

A few days later in November 2012, Sam and her partner at the time went to the shelter, and while he was filling out the adoption paperwork, she met Goonie in person for the first time. “It was happening no matter what,” says Sam. “I just knew.” Just as Sam had suspected, she immediately fell in love with Goonie, who was approximately four years old at the time.

Due to Goonie’s unique appearance, Sam knew there was something different about the friendly feline. While the staff at the shelter thought he was born with a cleft palate, when Sam and her then partner took Goonie to the vet, the doctor determined that wasn’t the case. “Our vet confirmed it definitely was not a cleft palate at all, but instead some unknown issues likely caused by either birth defects or abuse or trauma as a very small kitten,” explains Sam. 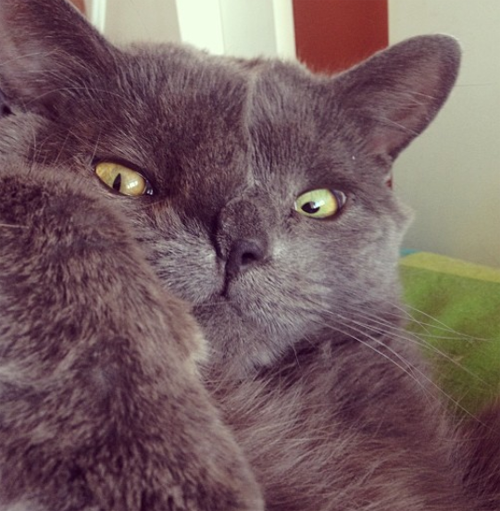 As a result of either congenital issues or trauma when he was very young, an exam revealed one of Goonie’s pupils was horizontal instead of vertical, and he was missing one of his nostrils.

However, after discovering Goonie was in relatively good health — and he didn’t enjoy traveling to the vet — Sam and her partner decided against subjecting him to further testing in order to determine the underlying cause of his unique appearance.

More than seven years later, Goonie is doing well, proving special cats are capable of having happy and healthy lives. “His eyesight doesn’t seem to be affected by his eye ‘deformity,’ ” says Sam, “and aside from some whistle-like snoring, his breathing seems to be pretty good considering he only has one nostril.”

However, Goonie has had some health challenges over the years, including severe mobility issues, because a significant portion of his spine is fused together. Fortunately, this special boy made a full recovery, and he’s once again as silly and playful as he was when Sam first adopted him.

“He is a touch slower — mentally — than our other cats,” says Sam, but no one is sure if Goonie’s cognitive delays are related to some sort of congenital issue, such as a chromosomal abnormality, or if they’re just a part of his unique personality. “But we do know he is the sweetest, most loving cat and we love him just how he is.”

While Goonie is incredibly affectionate, one of his favorite pastimes is attacking his mom’s shoes, screaming as he drags Sam’s sneakers around the room by their laces. However, it’s an activity he prefers do in secret, making it difficult for Sam or her current partner to catch a glimpse of Goonie’s ferocity in action. “I’m not sure if he is embarrassed or just wants you to assume his innocence, but he stops as soon as you walk into the room,” explains Sam.

In addition to sparring with Sam’s sneakers and cuddling with his family, Goonie adores playing with catnip toys and napping in his bed in front of the fireplace, proving this senior kitty is a pretty typical feline.

While people sometimes think having a special cat might make it impossible for them to enjoy their pet like they would the average feline, Sam believes their companionship can be just as good, if not better. “Animals with special needs are just that, special,” says Sam. “They are not lesser than.”

In fact, as far as Sam is concerned, she wouldn’t have Goonie any other way, and she hopes other people who adopt special cats will love and appreciate them just the way they are. “You have to accept them for who they are and what they are capable of and you’ll be rewarded with sheer love from a wonderful and a truly unique relationship,” explains Sam.

Without a doubt, Sam and Goonie have developed an incredibly deep bond over the last seven years, and this handsome boy now holds a very special place in her heart. While she’s had several pets throughout the course of her lifetime, Sam has never felt as connected with an animal as she does with Goonie, making him like a dream come true.

“He sleeps snuggled up to me all night, every night, and is never far away from where I am found,” says Sam. “I jokingly tell my now partner that Goonie is the love of my life, and he’s second best.”