After wanting to adopt a cat for years, Jules and her partner Matt visited Paws and Claws Humane Society (PCHS) in Rochester, Minnesota, in December 2012 to find the perfect pet. Jules had recently taken a year-long medical leave of absence from graduate school, and Matt — who was working as a wild land firefighter on a hot shot crew — was using his off-season to take care of her while she received medical treatment at the Mayo Clinic for her chronic pain symptoms. “We were both at home, I was focusing on my health, and what’s more healing than a cat?” says Jules. “So the timing was right.”

While the couple found all of the cats at PCHS to be incredibly cute, they’d met nearly every feline at the facility and had yet to feel a special connection with any of them. “We asked one of the volunteers how people pick an animal to bring home,” remembers Jules, “and she responded that the animals are the ones who choose the humans, and we would know when an animal chose us.” Bearing that in mind, Jules and Matt entered the last cat room at the Minnesota rescue only to find the majority of the cages were empty. Concerned they might have to leave PCHS without a pet, a soft, rhythmic sound quickly drew the couple’s attention.

“We heard a light banging noise and looked down to see a black and white tuxedo cat in a cage on the bottom row banging up against his cage door,” says Jules. “We asked why he was banging against the door like that, and the volunteer responded that he had a neurological condition that made him wobbly, and he was just excited!”

Jules and Matt learned Maceo (formerly Romeo) had been born with moderate cerebellar hypoplasia (CH), a non-progressive neurological condition that affects balance and coordination and often occurs in utero when a pregnant cat is exposed to a virus like feline panleukopenia.

After discovering Maceo was able to walk and not at all in pain, Jules and Matt agreed to take a closer look at the special needs feline who had been surrendered to PCHS by his former owners. “This handsome tuxedo cat comes barrelling directly towards us in his adorable, wobbly way!” remembers Jules. “He had a lion haircut that was growing out and getting a little bit shaggy, and he had a big poof on the end of his tail like a truffula tree from Dr. Seuss’s The Lorax.”

When Maceo’s slipped while walking across the room’s hard floor, Jules immediately felt bad for him, but when he quickly righted himself — completely unfazed by his minor fall — she was both surprised and impressed by his determination. “I felt a connection to him, moving in his own way, as I have my own way of moving due to my own disability,” says Jules. “We chuckled a bit as he wobbled his way towards us — the way he moves is just so adorable and special!”

After rubbing himself against Jules’s legs and headbutting her hand until she petted him, Maceo made his way over to Matt, performing the same ritual all over again. When Matt picked Maceo up, he immediately started purring, and Jules and her partner quickly realized this adorable tuxedo cat had chosen them to be his new family.

Maceo, who was approximately three years old when he met Jules and Matt in 2012, had been surrendered to Paws and Claws Humane Society by his former family after they came to the heartbreaking conclusion that they were no longer able to care for him. “Maceo’s previous owner had him since he was a kitten and was devastated to be bringing him to the Humane Society, but they couldn’t care for Maceo properly anymore due to health reasons,” explains Jules. “They left a letter with the Humane Society with tidbits about Maceo and his habits.”

Determined to give Maceo the life his former family had always wanted for him, Jules and Matt returned to PCHS the following morning — after a fitful night of sleep punctuated by dreams about this handsome tuxedo boy — and adopted this fun and affectionate cat with cerebellar hypoplasia.

“I suppose he knew that we needed him just as much if not more than he needed us,” says Jules. “Honestly, we had no choice once we met him — he was our little guy.” After they brought Maceo home, Jules and Matt quickly learned that just as his previous owner had said in their letter, he loved cuddling on the couch with his family and chewing on pony tail holders. 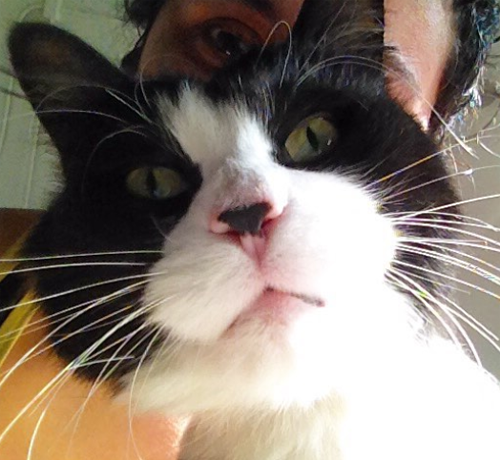 They also discovered that due to his lack of coordination and balance, Maceo had difficulty using the litter box, resulting in a number of messy incidents early on. “There were definitely some memorable poop incidents and frantic baths in the first few months after we adopted him!” remembers Jules. “But with some trial and error, we figured out the best litter box situation for him, as well as the best way to bathe him — he much prefers showers to baths.”

Nearly six years later, Maceo — who gets regular lion cuts at the groomer for sanitary reasons — rarely has accidents, and he is an incredibly happy and active 10 year old cat! “He absolutely loves to play,” says Jules. “In particular, he loves to bat at feather toys while doing somersaults around his wave scratcher or at the base of our loveseat!”

Maceo also enjoys when his parents chase him around the house, allowing him to seek refuge from his mom and dad by diving into a tunnel, and he adores chasing — or even racing with — Jules and Matt down a long, carpeted hallway. When this incredibly cute special needs cat isn’t running around or playing with his toys, Maceo enjoys keeping Jules company while she does yoga and physical therapy, often laying on her chest or face as she tries to get herself into different positions.

While it’s obvious Maceo is an incredibly active and happy cat, not everyone believes he has a good quality of life, and Jules has received a number of cruel comments on his videos when they’re shared on social media. “It is simply wrong to assume that any one particular quality of life is the only quality of life worth having,” says Jules. “Maceo is the happiest cat that I have ever met! He gives and receives so much love.”

Fortunately, Maceo has no idea what anyone has to say about him on social media, and this affectionate and fun-loving cat spends most of his time cuddling with his parents, playing with his toys, napping in the sun, chattering at birds, and watching Gus, Jules and Matt’s pet snake.

Even though Maceo wobbles when he walks, he’s a typical cat who likes to explore, play, hide, and practice his hunting skills. While Maceo may have special needs, Jules insists he really doesn’t require a lot of extra care, and she’s certain cats with cerebellar hypoplasia don’t need to be coddled. “They still need some independence,” says Jules. “Let them try things, even if they might flop over. They still need challenges and learning and exploration. And they need exercise to increase strength and coordination!”

When Jules and Matt visited Paws and Claws Humane Society nearly six years ago, neither of them thought they were capable of looking after a special needs cat. However, this incredible couple — who recently relocated to Denver, Colorado — plans to begin fostering felines with special needs after they settle into their new home, having realized over the past six years how animals with medical conditions are often overlooked and sometimes even euthanized for being different. “We intend to always adopt CH cats from now on,” says Jules.

After all, as much as she and Matt have helped Maceo since they adopted him, it’s impossible for Jules to ignore the tremendous impact this adorable tuxedo cat has had on her life — and Matt’s — over the last six years. “When I went back to finish grad school, I wanted to give up every. single. day.” explains Jules. “Maceo refused to let me give up. His loving nature, purrs, and playfulness have gotten both Matt and I through extremely difficult times of stress, illness, depression, and suffering.”

Like Maceo, Jules lives with a condition that impacts her mobility, and the way he has thrived — wobbly walk be damned — has inspired her to accept herself just as she is. “Maceo is who he is — he moves the way he moves, and he is happy and determined,” says Jules. “I have a disability myself, and every day, Maceo reminds me to be me. My heart is filled to bursting with how much I love that fluffy stinkybutt. He makes us smile and laugh every day.”