When Mélodie Fournier learned her friend was going to rescue nearly 20 cats from the home of animal hoarder, she was eager to help the felines who had been neglected for their entire lives. “My friend saw on the internet a woman saying she had to get 19 cats out of her house otherwise her husband would drown them,” says Mélodie. “They were animal hoarders and all those cats were malnourished, full of parasites, and had scabies and ringworm.”

In September 2017, Mélodie visited her friend’s home in Tassin-la-demi-lune, France, to help her treat the cats for ringworm when she encountered an adorable black and white kitten with hind leg paralysis. “I had to cover all her fur with a liquid for the ringworm and she was very cooperative considering she didn’t know me at all,” remembers Mélodie. “She had enormous sores which had been infected because she dragged herself in pee and poop.”

While the tuxedo kitten — who was approximately five months old at the time — had been mistreated her entire life, she was eager for affection and relished the attention Mélodie gave her. Heartbroken by all of the pain and neglect the young cat had experienced, Mélodie was determined to make sure the black and white kitten found a loving forever home.

“I knew she wasn’t going to easily find someone to adopt her because of her condition and I couldn’t bear the thought of her being killed because of that,” explains Mélodie. “I was ready to adopt her — with everything that it implied — so I did.”

Shortly after adopting the special needs kitten, Mélodie took her to the vet for a thorough medical exam to learn more about her paralysis and incontinence. “She fell off the third floor when she was two months old in her first home,” says Mélodie, “and they just left her like this. They didn’t take her to the vet.”

As a result of the fall — and the lack of medical care for the resulting injuries — the veterinarian found that the kitten had neurological problems, an off-centered pelvis, and a deformed leg that needed to be amputated. While Mélodie was upset to learn the paralyzed kitten would have to lose a limb because of the neglect she’d been subjected to, she knew this determined and resilient cat would still be able to thrive with three legs. 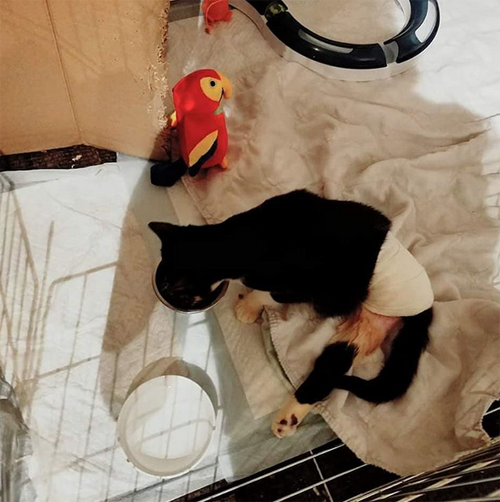 In fact, it was this revelation that prompted Mélodie to come up with the perfect name for this remarkable girl. “Since she was going to have one leg removed and she was one of the strongest souls I knew regarding the hardships she overcame, she was kind of a pirate!” explains Mélodie. “So I named her Bonny in reference to Anne Bonny, a famous pirate who navigated with Calico Jack Rackham and was a woman!”

Just as her mom had expected, Bonny adapted incredibly well to her new life as a three-legged cat, although Mélodie did have some other challenges caring for this adorable girl. “The most challenging issue we faced was to find a way to prevent sores resulting from her skin always rubbing on the floor,” says Mélodie. Initially, Bonny was limited to a small area with a mattress on the floor and her mom dressed her in custom outfits to help protect her skin.

Fortunately, Mélodie’s efforts were successful, and while Bonny still has a few patches of missing fur that will probably never grow back, she is a happy and active cat who is pain-free! “She loves being chased after in the house, playing with her toys —  especially with a piece of twine — and she enjoys big hugs on the couch with a sweet plaid blanket, kneading and purring like crazy!” says Mélodie.

Even though it’s obvious to Mélodie that Bonny is incredibly content, not everyone thinks incontinent and paralyzed cats like her are capable of having good lives. “People keep telling me that this is no life for a cat — or a dog — but cats especially since they are known to be clean animals,” says Mélodie.

However, thanks to Mélodie — who expresses Bonny’s bladder three times a day and washes her daily — this beautiful black and white cat is extremely hygienic. While Mélodie realizes not everyone would be willing or able to look after a special needs cat like Bonny, she insists that it’s really not that difficult or time-consuming, taking no more than 15 minutes a day to express and bath this affectionate girl.

Also, because Bonny requires a bit more attention than a typical cat, Mélodie thinks this added effort has allowed them to develop an incredibly unique relationship. “It creates a special bond to take care of an animal with such needs that overrides every tiny inconvenience of their condition,” says Mélodie. “It may be a bit scary during the first times, but it’s just an adaptation period and it quickly becomes a habit.”

Over the course of the past year, Bonny and her mom have established both a routine and a deep connection, and Mélodie has also realized how often special needs cats are discriminated against. Not only is Mélodie — a self-described animal advocate — determined to speak out on behalf of animals with special needs, she’s embraced her role as Bonny’s mom and caregiver. “She is my precious little baby,” says Mélodie. “I think she needs me as much as I need her.”

Without a doubt, Mélodie is so glad she decided to adopt this remarkable little cat. After spending the first five months of her life neglected and often in pain, Bonny now has a loving home and a mom who is more than happy to be able to provide her with the care and attention she needs to thrive. “She gives me so much joy and love everyday,” says Mélodie. “Actually, she’s a little miracle for me.”