When Melissa Lucas got a call from her mother, the manager of an apartment complex, about a blind and sickly kitten who was found all alone on the property on June 18, 2018, she wanted to help the five-week-old cat, but she was almost reminded of the marriage vows she’d made to her husband Tyler just two weeks earlier.

“In my vows, I promised not to take in any more animals without discussing with him first,” explains Melissa. “All I kept thinking was I literally just stood up in front of 200 people and promised not to do what I want to do right now.” 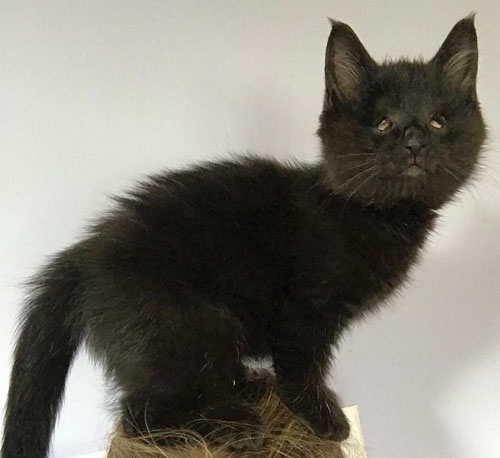 Thankfully, after discussing the matter with Tyler, the couple decided Melissa would bring the little special needs cat to their home for the night and then take him to a shelter the following day. Fortunately for Tyler, when Melissa met the extremely frightened and hungry kitten for the first time, it was hardly love at first sight.

“He was mean, or as mean as a blind five-week-old kitten can be, right?” says Melissa. “The first night we had him, I was feeding him and attempted to adjust the food container, and he lost his mind. He actually bit down onto my finger so hard he was dangling from it and I had to pry his little jaws open to rescue myself.”

The next morning, Melissa contacted her local shelter, but when the staff learned the tiny black cat was blind and sick, they explained that they were unable to take him without knowing the cause of his illness. After consulting with Tyler yet again, the newlyweds agreed to get the kitten medical treatment, which they assumed would consist of a course of antibiotics, and then surrender him to the shelter.

“I took him to the vet that day, brought him home and put him in the bathtub — that’s where he stayed for the first few weeks — and went to the gym,” remembers Melissa. “When I came back less than two hours later, Tyler was sitting on the edge of the tub with a sleeping cat in one hand, scratching the kitten’s chin with the index finger of the other hand.”

Melissa asked her husband of two weeks if the tiny blind kitten was the newest member of their little family, and with a sigh Tyler confirmed that he was. However, before deciding together to keep the young cat — who was born with micropthalmia, a congenital condition that causes animals and people to have unusually small and malformed eyes — Melissa had already chosen a name for him: Blinkin. “I named him after the blind character in Robin Hood Men in Tights,” explains Melissa.

While Blinkin and Melissa had gotten off to a rough start, she found herself growing fonder and fonder of him as he settled into his forever home. She also found helping him navigate his new environment incredibly gratifying, and as Melissa slowly gained Blinkin’s trust, the pair developed a very special bond.

“I really fell in love with his resilience and watching him learn,” says Melissa. “The first time we got him to come down off of our bed with the makeshift steps we created for him was magical!”

With his parents’ assistance, Blinkin quickly learned his way around his new home, but when he fell while walking near a stairwell when he was still a tiny kitten, he and Melissa both learned very important lessons. “I learned that I need to provide more guidance and let him get to know new obstacles a little bit slower,” says Melissa, “and he learned that he has to be a lot more careful in new locations.”

Nearly three years later, Blinkin has no trouble getting around his home, but he remains cautious and will take a long time to get down from places he doesn’t commonly explore. Fortunately, exercising caution in unfamiliar circumstances doesn’t prevent this handsome boy from having a very happy and active life, and there’s little he enjoys more than spending supervised time outside with his parents.

“He loves to be in the backyard,” says Melissa. “He’ll lay around in the sun, take in the sights and smells, nap, run freely, walk the perimeter of the fence. He even likes to go out in the snow.”

However, Blinkin does become disorientated from time to time, especially when his parents have to pick him up and move him to a different location, so they make sure to place him on a surface he’s very familiar with, such as the back of a couch or on a particular rug. “Sometimes, if he seems really discombobulated I will make a noise I know he’s familiar with — the sound of a light switch, the pantry door opening, clanging his water bowl — that type of thing,” says Melissa. “Sounds that are specific to certain areas of the house to help him get his bearings.”

Even though Melissa and Tyler have to take issues like this into consideration with Blinkin, they have both done their best to resist the urge to coddle him. While people often assume blind cats like Blinkin need to be babied, over the years Melissa has learned it’s actually better — for everyone involved — to try to foster a sense of independence.

“We both need to have confidence in his abilities,” explains Melissa. “If he needed me to help him do every little thing, I’d never be able to relax when I leave the house. And he’d be miserable. What kind of life would it be for a completely able-bodied animal to not trust his own instincts or be self-sufficient?”

Thanks to this approach, Blinkin is able to indulge his natural curiosity, allowing him to play and explore just like a sighted cat and even chase after the other animals who share his home, including Melissa and Tyler’s Lab-Chow mix, JD. “He played so hard with our giant dog when he was a kitten,” says Melissa. “I always laughed because I figured that if he could see how one JD’s teeth was the size of his teeny kitten paws, he’d be a little less inclined to throw caution to the wind and wrestle like it was nothing.”

Today, Blinkin is as brave and fearless as ever, and while Melissa wasn’t planning on adopting another cat, much less a blind kitten, when she brought him to her home more than two years ago, she is grateful she decided to make this very special boy a permanent part of her family.

“I love how much we have taught each other,” says Melissa. “I love how proud I am when he has a victory. I love that he greets me at the door each night when I come home. He’s just so special to us, and I think we are equally as special to him.”