When Nicole was working at an animal welfare organization near her home in Ontario, Canada, someone surrendered approximately 20 cats in September 2015. “We got a drop-off of about fifteen cats and a group of six young cats and kittens — all from the same house,” remembers Nicole. After speaking with her coworkers, Nicole learned the cats and kittens had come from a hoarding situation, and when she was tidying up the room some of the felines were housed in, she noticed a young tabby kitty who looked a bit different from the others.

A few days later, Nicole decided to take a closer look at the little cat with the unique appearance, and she discovered one of her eyes was smaller than the other, as was one of her nostrils. “She was definitely different but adorable!” says Nicole. “And she was so cuddly and sweet that I fell in love with her and she quickly became one of my favorites.” 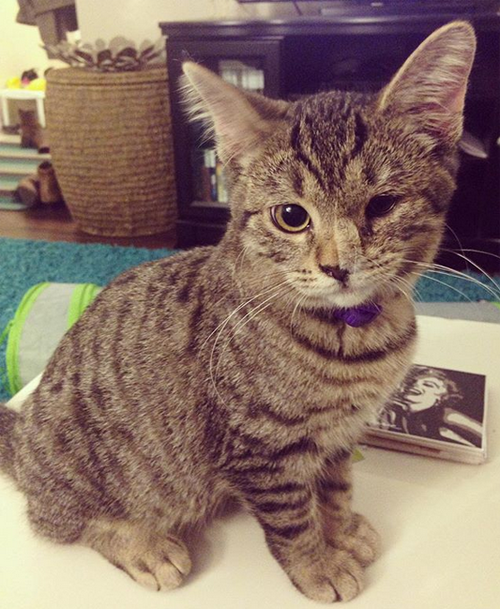 Having developed a connection with the incredibly affectionate and cute tabby, Nicole was upset when she discovered the little cat was at risk of being put to sleep because she had been deemed unadoptable by the organization’s director.

While the kitten looked different from the average cat, she was perfectly healthy, and Nicole knew she deserved a happy home after spending the first nine weeks of her life in a hoarding situation. “So I decided to adopt her,” says Nicole. “I had just recently rescued a stray kitten a month or two earlier, and I was thinking about getting him a buddy! It was meant to be!”

On October 5, 2015, Nicole officially adopted the incredibly cute kitten, naming her Nora. Despite being practically blind in one eye, Nora quickly settled into her new home, bonding with Nicole and her new feline brother.

More than three years later, this beautiful tabby girl is thriving in her forever home, even though she now has no vision in her left eye. “Her eye has been always changing since day one,” explains Nicole. “It started out with a slightly odd pupil, then it started to face to the side, then it turned grey and cloudy, and now you can’t even see her pupil in that eye.”

Having gone to college for animal care, Nicole closely monitors Nora’s eye and she takes her to the vet regularly to make sure she’s in good health and not in any pain. However, the affected eye constantly tears up, so Nicole has to wipe Nora’s face regularly to keep it clean, and it’s possible this three-year-old cat might need to have the eye removed one day.

Even if Nora eventually ends up as a one-eyed kitty, her mom is confident she will continue to thrive. “After working with pets for so long, I’ve seen firsthand how many ‘different’ pets there are who live perfectly healthy and happy lives,” says Nicole.

In addition to her unique face, Nora was also born with an extremely kinked tail, and she had an umbilical hernia as a kitten. “I can only assume because of the hoarding situation she was born in that she is the product of inbreeding or just a genetic hiccup!” says Nicole. While Nora’s congenital conditions are evidence of the importance of spaying and neutering pets — as well as preventing and ending animal hoarding — this adorable cat is also living proof that animals with special needs aren’t that different from average felines.

“I think a lot of people assume special cats can’t live normal healthy lives,” says Nicole, “but they totally can!” While being practically blind in one eye impacts Nora’s balance and coordination, she still loves to play, even if she tends to lose track of her toys and takes the occasional tumble off of a piece of furniture.

“Some of Nora’s favorite things to do at the moment are to find things with strings — like sweaters, shoes, bras — and steal them and parade them around the house,” says Nicole.

While Nora is fortunate to have very few health issues, not all special needs cats are so lucky. Even though Nicole hopes people will consider special needs kitties when they’re looking for pets to adopt, she also wants them to be realistic about the amount of care they’re willing and able to provide to an animal with health challenges.

“They oftentimes need a lot of extra care,” says Nicole. “If you are going to adopt a cat with differences, please make sure you financially, physically, and emotionally know what they need and you need to make sure you can provide the best for them!”

Thankfully, Nora — who was deemed unadoptable after being rescued from an animal hoarder — found a mom who is willing and able to give her the care she needs to thrive, and Nicole is so grateful she got the opportunity to share her life with this special cat.

“She means so much to me,” says Nicole. “Both my cats do! They have been with me through some really hard times over the years. They are both super intuitive and just know whenever I’m upset and one of them will just come and lay on me. They are constantly making me laugh as well! I love them like they are like my children!”