What is feline cerebellar hypoplasia?

Cerebellar hypoplasia (CH), also known as “wobbly cat syndrome,” is a condition where the cerebellum — the part of the brain responsible for movement and coordination — is underdeveloped. This can lead to a variety of symptoms, including head tremors, incoordination, and difficulty walking. Cats with cerebellar hypoplasia often have a wide–based stance and a lack of coordination, causing some people to describe them as appearing drunk.

There is no cure or treatment for cerebellar hypoplasia, but most affected cats can learn to adapt and live relatively normal lives. The severity of the condition can vary greatly from cat to cat, and some may only have mild symptoms while others may be severely affected.

What is the cause of cerebellar hypoplasia in cats?

Cerebellar hypoplasia occurs in utero, often when a pregnant cat is exposed to a virus like feline  panleukopenia, causing her kittens to be born with underdeveloped cerebellums. Thankfully, CH is not contagious and cannot be passed on to other cats or animals.

There are other potential causes of cerebellar hypoplasia in cats, including nutritional deficiencies and exposure to toxins

How is cerebellar hypoplasia diagnosed in cats?

There are a couple ways to diagnose cerebellar hypoplasia in cats. One method is through a neurological examination that will assess the cat’s ability balance, motor skills, and coordination. However, an exam conducted by a neurologist won’t yield an absolutely definitive diagnosis.

The only way to diagnose cerebellar hypoplasia with complete certainty is through imaging tests such as computed tomography (CT) or magnetic resonance imaging (MRI), as these tests can show if a cat has a smaller than normal cerebellum.

How can I best care for a cat with cerebellar hypoplasia? 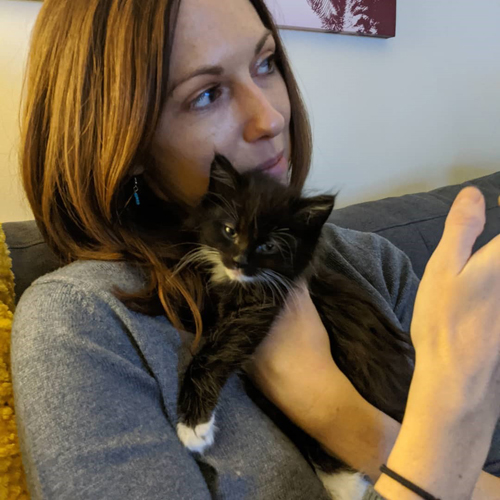 There is no one definitive way to care for a kitty with CH, as each cat‘s individual needs will vary depending on the severity of their cerebellar hypoplasia and their unique symptoms. However, some tips that may help include:

What products should I purchase to best care for a cat with cerebellar hypoplasia?

Do cats with cerebellar hypoplasia suffer?

Unless they have another condition that adversely impacts their quality of life, the average wobbly cat isn’t suffering. While they not be able to do everything a typical kitty can — such as running or jumping — CH cats are not unhappy, nor do they realize they’re different from other cats. After all, cats are born with cerebellar hypoplasia, so they have never known anything different.

No, CH isn’t fatal, and cats with cerebellar hypoplasia have normal lifespans. Plus, because it’s non-progressive neurological condition, the symptoms won’t get worse over time. Euthanasia should only be considered for cats with cerebellar hypoplasia if their quality of life is severely compromised and they are experiencing significant pain or suffering. In most cases, however, cats with this condition can enjoy a good quality of life with proper care and management.

Should I adopt a cat with cerebellar hypoplasia?

Yes, if you’re able to accommodate their special needs, then you should definitely adopt a cat with CH! They are incredibly inspiring, and people with wobbly cats often say they are more loving and affectionate than typical felines.

To help explain cerebellar hypoplasia in cats, we created an infographic you can share online and also download and print.

We’ve also created our list of essentials for CH cats, because we have extensive personal experience caring for wobbly kitties.

Videos and Articles About CH Cats

If you want to learn more about individual CH cats, you can read the articles we’ve written about them and even watch the videos we’ve created.

Read our article about Natalie

Read our article about Timmy

Read our article about Phin